‘It’s about a lot more than just money in the till’: how lockdown has shifted priorities for Southsea’s purveyor of pies and records

Spurred on by his local community and his passion for music, Steve Courtnell is determined to open his doors once again 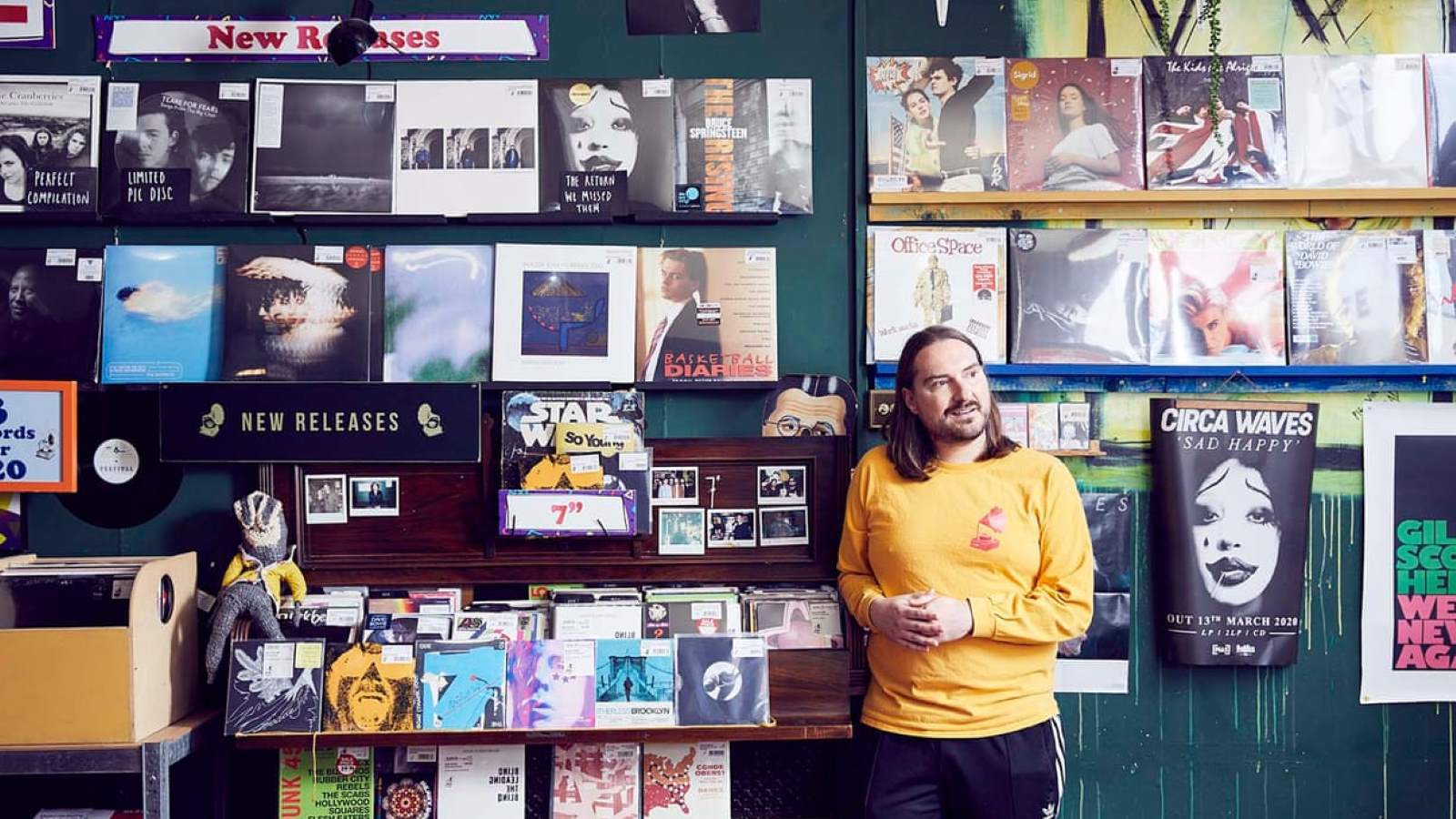 In challenging times, we all crave simple comforts: things like good company, good food and good music. All reasons to head to Southsea’s Pie & Vinyl for some well-deserved self-love once lockdown fully lifts then – this is the cafe-cum-record shop and community hub that puts the rave in gravy and the thrash in mash.

“It was conceived in my head while I was working an office job,” says Pie & Vinyl founder and owner Steve Courtnell of the inspiration behind his unusual business, which he thought up while working in management and inventory in the fab world of consumer luxury and beauty. “My big love is music and always has been. So, like a lot of people, I kind of had this dream, which was to run a record shop.” His dream came true in April 2012 when Pie & Vinyl opened its doors for the first time.

In the digital downloading and streaming age, such a vision could have proven half-baked. But Courtnell put faith in the vinyl revival, which over the last decade has seen sales of vinyl records – often with free download codes enclosed – recover to their highest level in years. It helped that Courtnell, a Southsea native, had a clear idea of the type of record shop he wanted to run – an open-minded and welcoming focal point of the local alternative scene. It was to be a place to meet and hang out with like-minded souls and even attend in-store gigs. “Whatever kind of music you’re into, I wanted it to be somewhere you could feel at ease,” he says.

As for the pie and mash? Courtnell simply had a desire to put a contemporary spin – pun intended – on a traditional working class dish. You might even call it a remix. “The great thing about pies is you can put almost anything in them,” he says. “So we started doing pies dedicated to bands and albums and record labels, some of which have become really popular.”

Favourites such as Back to Black, Steak That, Pearl Ham and Sonic Pieways have kept a steady stream of customers drifting through the door for eight years now. But given that it specialises in niche interests, Pie & Vinyl has always had to stay nimble. “We don’t take anything for granted for one second,” says Courtnell.

But no amount of caution could have prepared him for what was coming in March this year, as Covid-19 suddenly hit Britain. “It felt like something from a film,” says Courtnell of the gloomy day he heard that his dream business would have to close.

With his staff furloughed, leaving him to deal with online sales on his own while also looking after young twin boys at home, things might have got on top of him. “But I guess I’m quite an optimistic person,” he says. He has used the time out from his usual routine to draw breath, plan for the future, and, quite apart from anything else, feel thankful for the music. “It has really allowed me to focus on the records,” he says. “To be honest, the records are the thing that got us through this.”

A tide of goodwill from the Southsea community that Pie & Vinyl serves has helped to push online sales way beyond what it’s used to seeing. “It’s been really humbling to see a lot of old customers reconnect with us – these waves of people that wanted to buy records to support us,” he says.

One day he came into the shop and found an envelope on the floor. “Someone had taken the time to make an anonymous card with a pie on the front – a photo of their dinner by the look of it,” Courtnell laughs. “And they had put about £30 in cash inside from a whip-round, together with a message saying: ‘Keep strong, can’t wait to have you back, buy yourselves a drink or something.’ It’s a moment that really sticks in my head.” 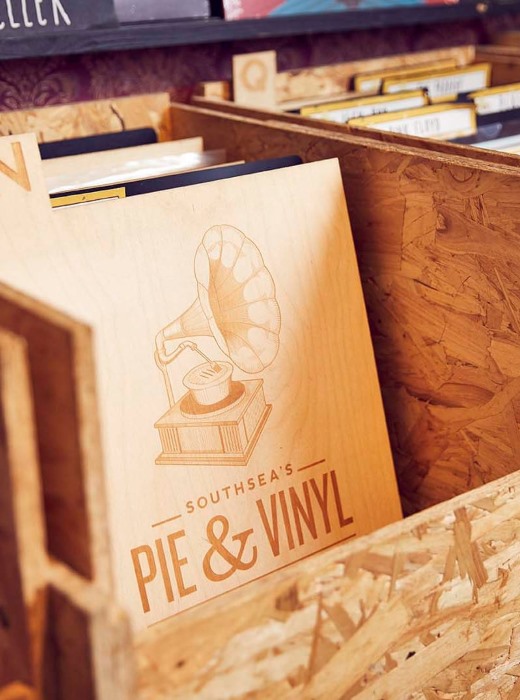 "If you’re a record shop you’re quite important to your city or your town’s culture, and kind of a gatekeeper of that as well” 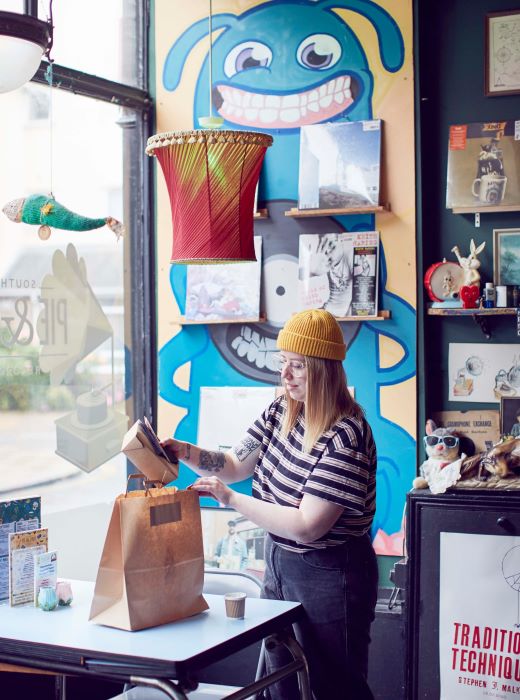 While he can’t wait to open the doors of Pie & Vinyl again, the prospect of doing so during a recession, with social distancing rules to be rigorously obeyed, is daunting. Particularly as the food side of the business is likely to be restricted to takeaway-only for some time. But support from Visa’s Shop Local campaign has been encouraging for Courtnell as an independent trader facing an uncertain future. “It feels nice knowing that a major company like this cares about the smaller businesses and understands that they are part of the foundations of a community,” he says.

If the turmoil of the last few months has taught Courtnell anything, it’s the role that independent shops, and particularly something like a record shop, can play in the life of a place like Southsea. Their impact goes far beyond simply the wares that they sell. “If you’re a record shop you’re quite important to your city or your town’s culture, and kind of a gatekeeper of that as well,” he says.

“It’s all about fun really – in dark times if you have a chance to make people smile or entertain them somehow, then I guess in your very small way that’s how you step up and help. It feels like we’ll be offering the community a service as much as anything when we open the doors,” says Courtnell, eagerly anticipating the day that the needle hits the groove at Pie & Vinyl again.

“We’re inviting people to come into this little haven and start enjoying music and seeing record covers and talking about music once more. It’s given me another dimension of love and understanding of what we do, and made me appreciate that it’s about a lot more than just getting money in the till. That’s something to look forward to seeing in action, now more than ever.”