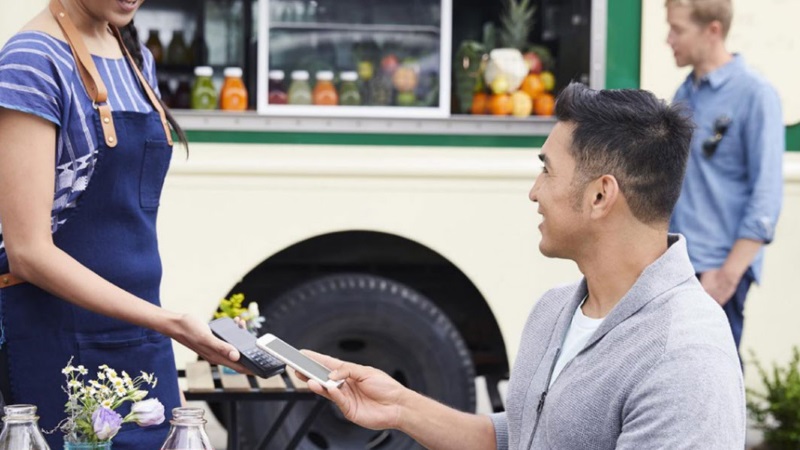 Smart phones and computers really have paved the way and changed how we as consumers use biometric authentication when we purchase something. We noticed these changes last year when we launched Visa with Apple Pay and Samsung Pay in Sweden, as part of our overall goal of improving security and making the payment process faster and more convenient for the consumer.

This was also the topic for our third Visa Network Breakfast in Stockholm were we discussed what the future holds for biometric payments. I joined Carita Weiss, CIO at MedMera Bank and Joakim Karlén, Director of Product Management VR at Tobii on stage together with our moderator Mats Lewan. Our talk started out in true sci-fi style with Carita showing us her two chips implanted underneath her skin. The first one, a RDI chip the size of a grain of rice that she uses to open the doors at the office. The second one, a RFC chip that she is currently using for various beta tests. A chip that can be used for contactless payments, or as in the case for SJ (Swedish rail), as a train ticket. It was fascinating to hear Carita explain how the chips quickly changed her behavior, as she now finds herself trying to scan her hand at every other surface possible.

I don’t think that the everyday Swede is ready to insert a digital chip underneath their skin just yet, but acceptance is growing. In 2016 we did a survey which stated that 13% of Swedes were interested in chip implants. But more impressive were the numbers showing a true confidence in biometric authentication in payments. 49% of Swedes said that they thought biometric authentication would make payments faster and more secure in the future.

Security is an important issue and one of the strong upsides using biometrics. It’s a technology more difficult to hack which helps reduce fraud. Joakim Karlén put it nicely when he said that “it’s very difficult to steal and hack a fingerprint or an iris and also, you can’t really forget them at home.”

Implementing biometrics as a standard won’t happen overnight. However, at the moment we see more and more combined biometric solutions. For instance, on-card fingerprint scan combined with pin number Earlier this year Visa presented the first commercial pilot to test an on-card biometric for contactless payments together with Mountain America Credit Union and Bank of Cyprus. The solution was a credit card using both fingerprint scan and voluntary pin code for authentication. It’s also a convenient solution for the retailer as no infrastructural changes are needed. The technology is in the card, as well as all your personal information. No information is transferred, stored elsewhere or exposed to a third party. The payment data itself is tokenized and useless if someone would hack it. The same goes for Visa with Apple Pay and Samsung Pay.

I agree with what Carita brought up during our discussion, that “there is a need for an industry standard” when we are dealing with biometric payments. To get to that point, someone needs to lead the pack so to speak. Beta testing and trials are expensive but if governmental institutions pave the way, like they did with the implementation of Mobilt BankID in Sweden, it won’t be long before we get enough volume which, in turn could mean more cost-effective biometric payment solutions.

In the end, for me as an everyday consumer, this would mean that I could just walk up to the barista and get my cappuccino to go without even reaching for my wallet, card or phone. An iris scanner combined with facial recognition has already identified me entering the coffee shop alerting the barista of my usual order. No line, no fuss, no pin code and no stress, just a fast and secure payment. As it always should be.

You can listen to the entire third episode of The Visa Network Breakfast Podcast (in Swedish language) here.