When you’re arranging an event or festival, one aspect is paramount: customer satisfaction. You want your customers to enjoy the event – focusing on the entertainment refreshments and atmosphere that will inspire them to spread the word and buy a ticket for next year.

Of course, it’s difficult for a customer to focus on having a good time if they’re worried about practical concerns such as adequate facilities, whether they have enough cash, or if that raincloud will vanish. Visa research from the UK shows that nine in 10 (89%) UK festival-goers cite cash complaints such as losing cash, running out of money, or ATM charges as their biggest festival frustration – with other concerns including dirty or unhygienic facilities (74%) and the ever-present threat of rain (59%).1 While event organisers can’t do much to control the weather, it is possible to make sure many of the more practical aspects of an event take place in the background.

Payments are one such aspect. That moment of friction when you realise you don’t have enough (or any) cash on you for a jacket potato could leave you hungry. Standing in a queue for an ATM rather than spending time with your friends and family takes you away from the entertainment and atmosphere you came to enjoy.

It suits merchants too – and, as many event organisers will know, much of the customer experience relies on having the best merchants and keeping them happy. Indeed, allowing consumers to pay in the method they prefer means capturing their business (and not sending them off in search of an ATM, and risk losing them along the way).

Recently, Snowboxx – a snow and music festival in Avoriaz, France – put this to the test. Visa sponsored Snowboxx – working with iZettle to provide each merchant at the festival with a card reader. Festival-goers to previous Snowboxx events had three main options available to them when buying food, drinks, snow equipment and merchandise: take cash with them to the festival, withdraw cash from an ATM, or purchase a Snowboxx token/coin from the festival that could be used to buy food and beverages. Snowboxx 2018, however, had contactless payments, meaning its 6000 festival-goers (97% of whom come from the UK, a region where almost 43% of all retail transactions are made on debit card)2 could pay at the festival in the same way they do, every day, at home.

Indeed, the speed and simplicity of contactless can mean less time queuing, and more time enjoying the slopes. Carrying around less cash may help to ease concerns around theft, and could allow customers to be more carefree – not having to calculate how much cash to take with them, or worry about running out. In fact, 61% of the UK festival-goers we surveyed in 2017 said that being able to use card and mobile payments would improve their overall experience.5

Again, having happy customers also helps the merchants. Having shorter queues increases throughput, and having less cash in the till not only reduces the risk of cash theft but also means less cash to count and transport. Furthermore, merchants at the festival reported that the iZettle readers – designed specifically to suit the needs of small companies – were easy to use and cheaper than expected:

“The system was great to use – super efficient, easy to manage, and cheaper than the previous payment system I used. Consider me converted,” said Sketch at Syndicate, a Snowboxx merchant.

Crucially, Visa’s sponsorship of Snowboxx and work with iZettle meant that contactless payments were available throughout the festival. By making sure all the event’s merchants were able to accept digital payments, Snowboxx was able to ensure the payment experience was seamless – enabling customers to wander between areas with the confidence that they could pay wherever they went.

Balancing practical issues with entertainment is a key ingredient to a successful event – making sure every step of the customer’s journey is both seamless and fun. As Snowboxx shows, introducing contactless is just one way to make payments more carefree. 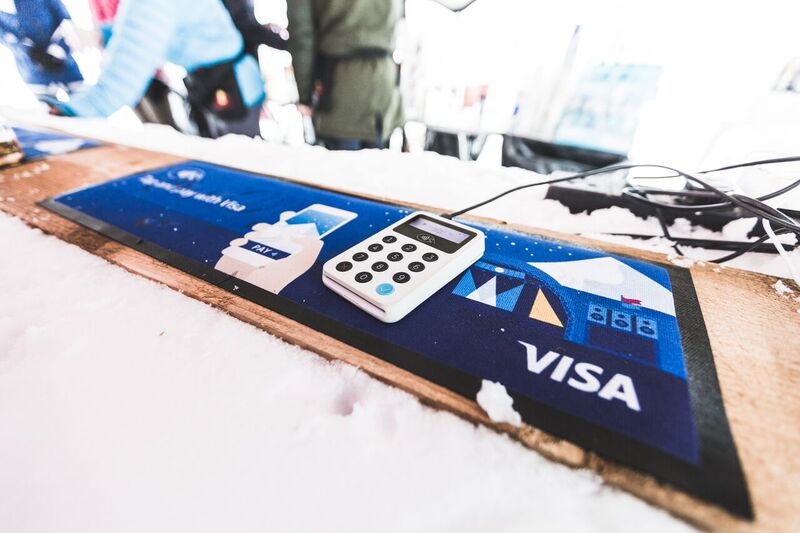