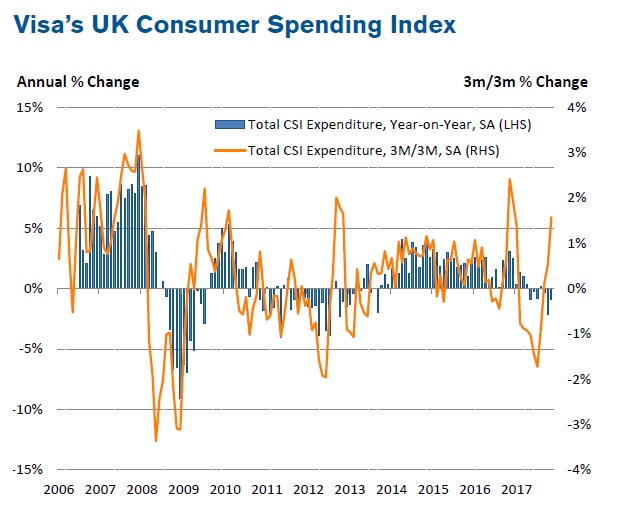 “Festive cheer was in short supply for the UK’s retailers during last month as Black Friday promotions failed to lift consumer spending. November’s poor performance means that we stand by our earlier prediction that the UK will see its first fall in overall Christmas spending by consumers since 2012.

“The gap between the performance of e-commerce and the high street widened again last month. Bricks-and-mortar retailers saw sales down for the seventh consecutive month, while e-commerce continued its upward growth trend, boosted in particular by consumers taking advantage of online promotions around Black Friday.

“It would appear that consumers are making further changes to their shopping priorities as a result of the increasing strain on household budgets. Cutbacks on big-ticket items such as car purchases and bookings for Christmas trips abroad led to the largest drop in spending on Transport & Communications in November. In contrast, spending on Miscellaneous Goods which includes trips to hair and beauty salons and cosmetics and jewellery purchases saw the largest increase, offering further evidence of the ‘lipstick effect’, whereby people opt for smaller treats, at the same time tightening their belts when it comes to larger purchases.”