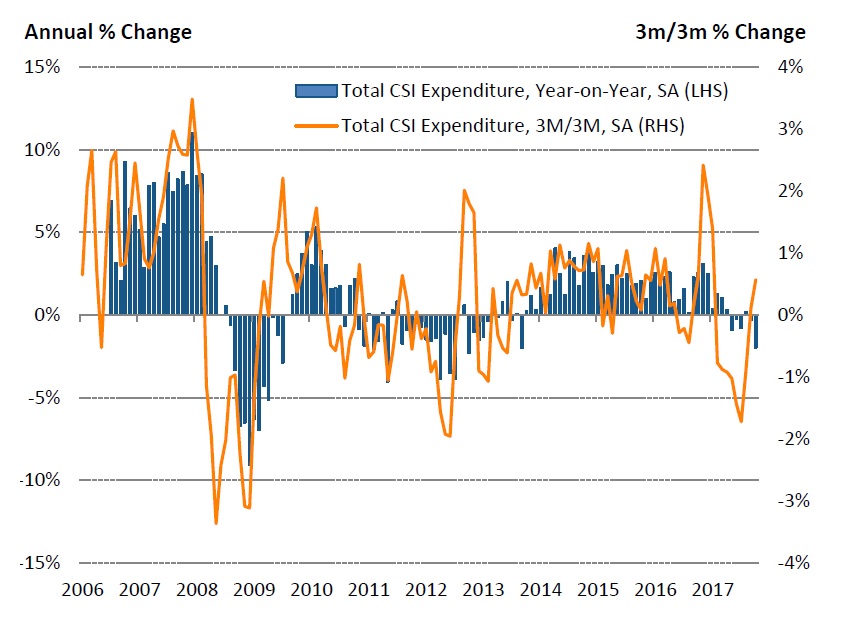 “The pre-Christmas trading season got off to a poor start for retailers with October spending falling at the fastest rate in over four years. The figures are a stark indicator of the strain on household budgets even before the Bank of England’s recent interest rate rise.

“Clothing retailers were the worst hit, suffering from the fastest drop in spending since the Index started in 2009. The unseasonably warm weather didn’t help, but the sector has been struggling to increase sales since the beginning of this year. This is reflected more broadly in the high street performance, with spending falling for the sixth month in a row. In contrast, e-commerce continued its upward growth trend as consumers moved even more of their shopping online.

“We’ve seen another steady month for the hospitality sector. Hotels, restaurants and bars reported a healthy increase in spending, boosted perhaps by families making the most of the half term break, Halloween and early Christmas bookings.

“Retailers will now be pinning their hopes on strong performance around Black Friday and Cyber Monday. November’s data will therefore provide the first real clue on how Christmas is shaping up.”

“UK Consumer spending declined at the quickest pace for over four years in October, with the latest Visa UK CSI data pointing to a -2.0% decline in expenditure compared to a year ago.

“Looking at more detailed figures, the high street remained a key source of weakness, and recorded the second-steepest drop in expenditure since April 2012, falling by -5.0% on the year.

“At the broad sector level, spending on Clothing & Footwear fell at the quickest rate on record (-9.0% year-on-year), with relatively mild weather in October likely weighing on the performance of the sector. Many other key areas of spend also saw reduced expenditure at the start of the fourth quarter, such as Food & Drink (-2.0%) and Transport & Communication (-6.9%). Even Recreation & Culture - which has generally recorded robust growth over the past few years - noted lower spending, with the rate of decline the strongest since March 2011.

“The data add to evidence that falling real wages, muted consumer confidence and lingering uncertainties over the direction of the UK economy are having a substantial impact on spending.”