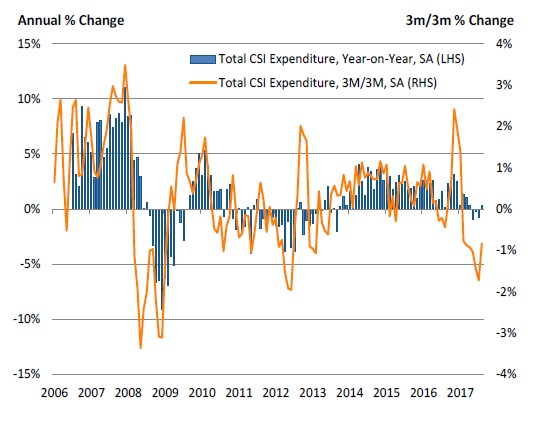 “Consumer spending in August has bucked the trend of the previous three months, registering a marginal increase against the same period last year. Nevertheless we are wary about taking this as a sign that the household squeeze is easing given the clear slowdown in spending during the preceding three months.

“Worth noting though is that the story is very different when you look at e-commerce in isolation, which registered a 6.5% increase in August against a 2.6% drop for Face-to-Face expenditure. This continues the trend of e-commerce spending growing at a much faster rate than Face-to-Face spending which has been evident in virtually every month since the beginning of 2013.

“If we look at different sectors, spending on clothing was down in August, albeit at a slower rate than in July, despite a much hoped for back-to-school boost. Spend on transport and communications fell for the eighth consecutive month as consumers continued to shy away from big ticket items such as car purchases and air travel. On the other hand, the experience economy saw some success last month, possibly as a result of a rise in staycations due to the weakness of sterling. This translated into a four-month high in recreation spending and sustained growth in the hospitality sector.

“There was also evidence of the ‘lipstick effect’, which consumers spending more on small treats such as jewellery, beauty products and trips to hair salons, reflected in a 10.1% increase in the miscellaneous category.”

“We couldn’t be happier with our performance in August! Turnover was up 9% on the previous year and total visits increased by nearly 6%. August is usually quiet for us because of people going on holiday, but that trend has certainly been bucked. I’d put the outstanding performance down to our strong social media outreach and the ‘unicorn effect’, as many of our customers have requested hairstyles that they see in the media.”

“We had a rather quiet August. This is often the case for us as everyone who has a summer wedding usually orders and pays for their cake well in advance, and the holidays mean people are away and don’t buy as many one-offs. Whereas I get my business through social media and word of mouth, other people in the industry that go to food markets to sell their products see sales rise in July and August due to the higher footfall due to more staycations.”

“We had a small dip in revenue in August. The summer holidays wouldn’t be the busiest time for us. And as we are changing our business model to focus on higher quality and slightly more niche dining, we expected an initial dip in the number of customers anyway. One upside to the change is that those who have come through the door are willing to treat themselves to quality meals rather than looking for a bargain.”