June rounds off worst quarter for spending since Q3 2013 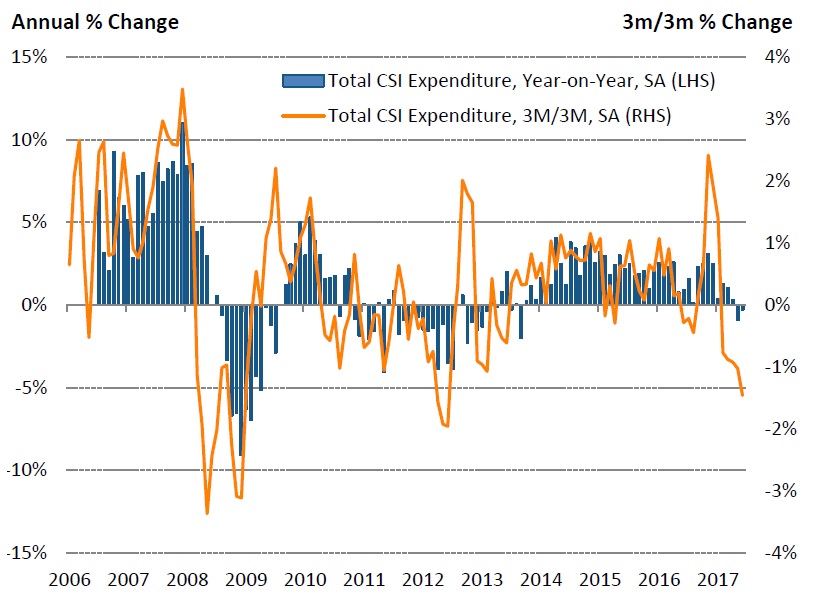 “June data provides further evidence that an increase in the cost of living, coupled with slowing wage growth, are beginning to squeeze household disposable income. Consumer spending fell for the second month in a row, rounding off the worst quarter since Q3 2013.

“It’s clear that inflation is beginning to affect shopping habits too, with consumers diverting their spending to essentials. Spend on food and drink grew by nearly 2%, while household goods suffered from a substantial drop as consumers cut back on big ticket furniture and homewares. The experience sector – which the Index has shown consistently outperforming in recent years – has started to feel the impact too. Spend on recreation and culture dropped for the first time in nearly four years.

“The recent heatwave and summer sales have failed to reverse the high street’s fortunes, with face-to-face spend falling for the second consecutive month. On the other hand, e-commerce spend continued to grow, albeit at a slower rate compared to May.”

It’s been a challenging month for us, with sales down 6% on last year. The decline is likely caused by customers hunting for deals when they dine out. This hasn’t come as a shock and we’re looking to cut costs by doing more work ourselves. It’s been quieter for other restaurants in the area too, some businesses have reduced their opening hours and others have closed altogether.

June is usually one of the quieter months. Generally, our customers are either saving up ahead of their summer holidays or spending time socialising in the sun instead of shopping for new clothes. On top of that, constant discounts and promotions from larger retailers have made it more difficult for us to increase sales. We feel however that more consumers are turning to small independent businesses over large retail chains and we hope this will help us attract more customers down the line.

June was a rather tough month for us. A big office around the corner moved to a different part of London, taking away a large number of our regulars. We had less passing trade too, despite the weather getting better. At the same time, with rising inflation almost all of our main ingredients have increased in prices, putting more pressure on our cash flow.