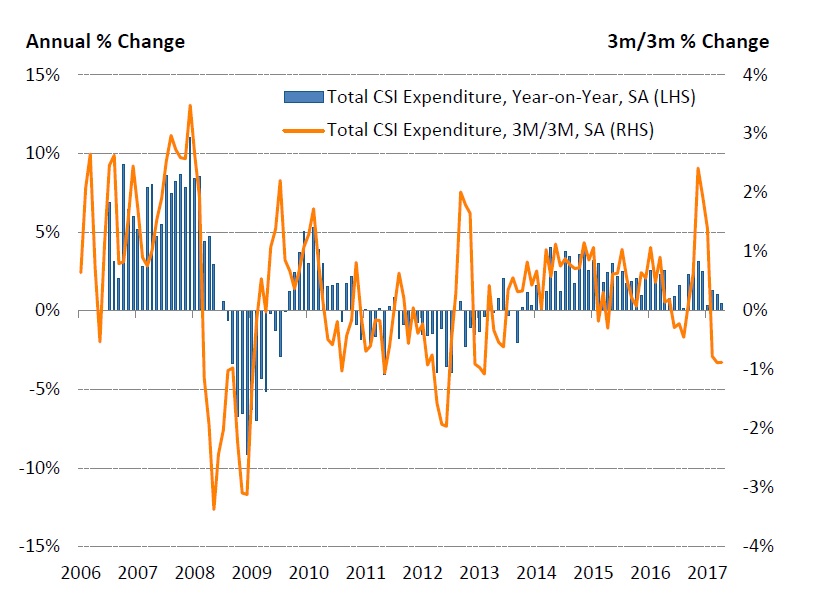 “Consumer spending slowed down further in April, as consumers tightened their belts in the face of rising prices running up against stalling wage growth. Annual spending growth fell back to 0.5%, from an already subdued rate of 1% in March.

“While overall figures suggest that clouds are gathering over British consumers, there were still some bright spots. Easter and the extended half-term break may have contributed towards a strong uplift of over 9% in the hospitality sector. Meanwhile, Easter eggs and hot cross buns helped food and drink sales rise at their fastest rate in two years, up nearly 6%. This seems to support the claim of some food and drink retailers that Easter is becoming ‘the new Christmas’.

“Clothing and footwear retailers experienced a long-awaited boost as consumers took advantage of mid-season sales or shopped for warmer weather abroad. Spend was up 2.3%, its highest rate since October 2016. In contrast, bargains on big-ticket items such as furniture and white goods over the Easter weekend failed to reverse the fortune of the sector, with sales falling by 3.4%.”

April was a quieter month for us. Our customers are more interested in our offers and deals, picking those over the more extravagant options. We understand that this may mean the business takes an initial hit, but our profits should level out as the trade builds up over time. This switch could be due to election uncertainty, as many of our customers are older and unsure of what might happen to their pensions.

This past month has been an unusual one for us. We experienced a surge in bookings during the first couple of weeks in April, and even had a last minute wedding cake order. This could be due to people tying their celebrations into the Easter break.

Those extra bookings aside, our customers appear to be spending as normal, treating themselves to the cakes of their choice, with very little haggling if any at all, but we have started to notice that price increases are starting to eat into our profits quite significantly.

April wasn’t a great month for us as many of our customers were away over the Easter weekend and the half term break. Price increases on food also mean that clothes are less of a priority for those on a budget. The mild but cool weather, didn’t increase interest in our new spring summer stock either. On top of that, aggressive discounting from retailers seems to have removed consumers’ sense of urgency. We really hope business will pick up next month though, as the weather gets better.