March rounds off weakest quarter for spending growth since Q4 2013 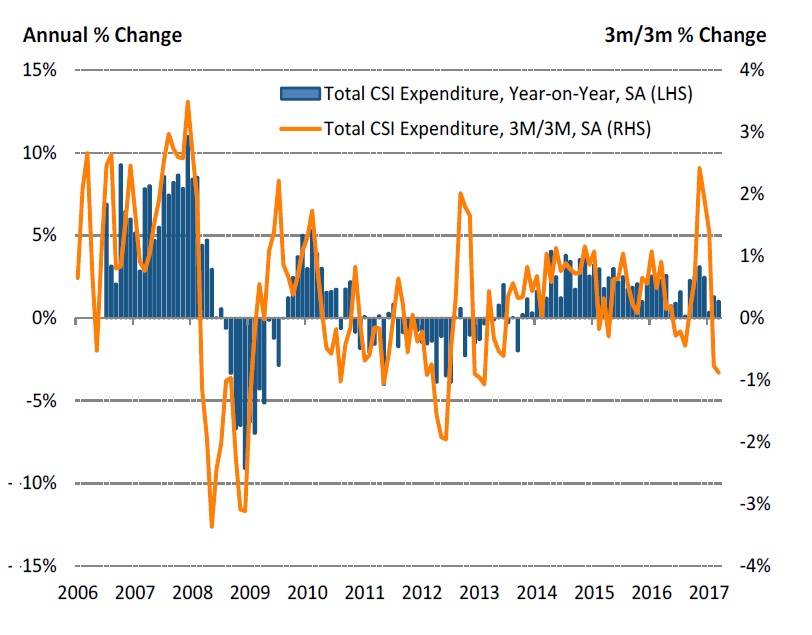 “Our data suggests that consumer spending is beginning to slow from the strong levels seen in late 2016, as rising prices increasingly squeeze household purchasing power. While overall spend continued to expand in March, the average growth rate for Q1 slowed down sharply to 0.9% from 2.7% in Q4 2016. Q1 was in fact the weakest quarter in terms of growth in the past three years.

“There were, however, still pockets of resilient growth in March with the leisure and hospitality sectors seeing growth of 7.2% and 4.0%, respectively. The Index confirms an ongoing trend of consumers prioritising experiences, as spend on food, clothing and household goods continued to trail behind.

“Another trend is consumers increasingly favouring "clicks" over bricks and mortar shops. Benefiting from this trend, online retailers saw spend up 8.2% in March, marking the strongest monthly growth rate since Black Friday boosted November's figures. In contrast, milder weather and longer days did little to lift high street spend, which was down 1.3%.”

Our revenue was up 17% compared to last month and we’re very happy with that. Mother’s Day is usually an important event for us and this year was no exception, with customers treating themselves and their mothers to hearty meals over the weekend.

Although the weather only started to warm up towards the end of March, milder temperatures coupled with longer days have already made a significant difference to our dinner service, as more people feel encouraged to leave the house.

March was a good month for us as our new spring/summer stock brought in more online sales. We’re now hoping that customers on the hunt for new clothes for the Easter holidays and half term breaks will drive growth further for us in April.

We feel lucky to have made the decision to move our business online. With rising rent and the new business rates kicking in, it is a particularly challenging time for independent bricks-and-mortar clothing stores.

March wasn’t a very good month for us. Despite the weather getting better, we had fewer customers through the door. There have been some changes in the local area, with two large companies close to us moving to another part of London. This might have been the main reason behind the decline in sales. It also seems that people are becoming a little more hesitant about spending, as the average bill for March was slightly lower than in previous months.