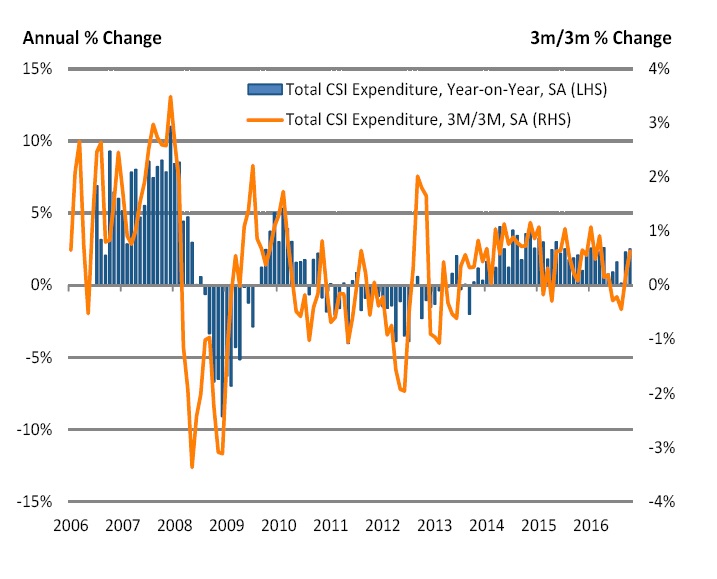 “Consumer spending growth rose to a six month high in October. Talk of potential price rises does not appear to have dented consumers’ confidence, with spending up 2.5% on the year, on a par with pre-referendum levels.

“The experience economy continued to fuel this growth. Hospitality and leisure were the best performing sectors once again, boosted perhaps by the half term break and Halloween, with a noticeable increase in spend on food and drink.

“We’ve also seen two strong comebacks this month. Clothing and footwear bounced back strongly from a disappointing dip in the previous month, up 4.7% in October, and the highest level of growth since September 2015. New season stock, combined with a chilly start to winter created the perfect conditions for the high street to rebound from last month’s flat line.

“As we get closer to the all-important Christmas trading season, it will be interesting to see whether the strong momentum in October continues into Black Friday and beyond.”

“October tends to be a good month for us as people settle back into their routine following holidays and new winter menus are launched, and business in October saw a marginal pick-up of 0.4% compared with September. We look to Christmas parties and gatherings as key revenue drivers for the rest of the year. Although these haven’t been totally booked up yet, it feels as though people are increasingly leaving making bookings late. There do seem to be concerns about inflation and petrol price rises. Bearing this in mind we’re taking a cautious view as we look to the future.”

“We had a good month in October with sales significantly higher than in previous months. The change in the weather and the hot soup range we have may have helped draw more customers through the door. On the other hand, our stock costs have risen in the past few weeks which means we will be under increasing pressure to keep our prices low for our customers in the coming months.”

“While our sales in October were quite standard for this time of the year, there were two positive factors that we noticed this month. First, we saw an increase in orders during half term, mainly for children’s parties. Second, our customers were in the mood to spend as more were opting for our top of the range cakes for their special occasions. Looking forward, we’re slightly worried about rising inflation and how it will impact our costs and sales. “