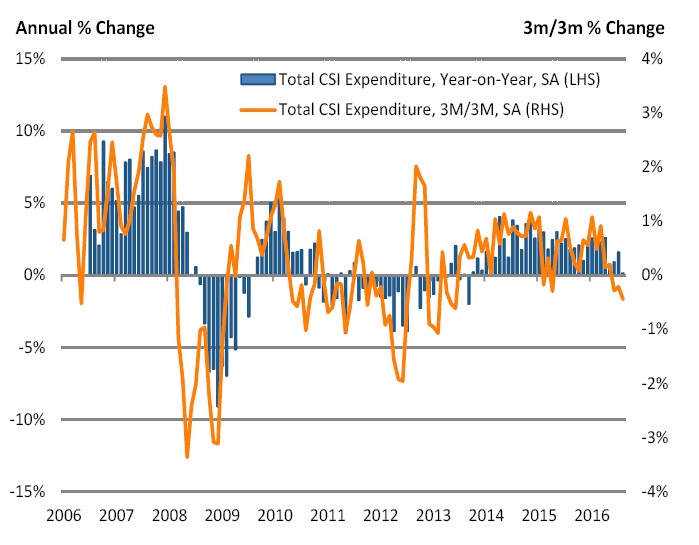 “August saw the smallest increase in consumer spending for almost three years at just 0.1% on the year, continuing the trend of modest growth rates we’ve seen across most of 2016. The high street in particular had a difficult month, with spending down 2.8% on August 2015.

There’s a mixed picture across the spend categories with some seeing increased expenditure in August, albeit at rates of expansion that are slower than in previous months. In line with reports that people opted for UK staycations over last-minute overseas trips in August, leisure and recreation remained the strongest performers, with transport and communications - the category that captures flight bookings - experiencing a significant fall. Meanwhile, after a strong July (+3.8%), clothing retailers saw a (-2.6%) fall in spend on the year, extending an inconsistent year for the sector.”

“August wasn’t as busy for us, but this was expected. We had fewer corporate catering requests, as many people were out of the office on holiday. Although we spotted more people out and about as the weather warmed up, we didn’t necessarily find that the heatwave led to more spend at our pubs. Towards the end of the month spend did pick up, as we benefitted from a bank holiday boost. And now that people are returning to work we’re already starting to receive Christmas party enquiries, so we expect that this lull will be short-lived.”

“This August wasn’t as hectic for us compared to this time last year, but this worked out well as it allowed me to comfortably take a week off without losing out on any business at all. As wedding season tends to run until October and we’ve already had a number of big orders ahead of winter, we expect business to pick back up in the coming months.”

“June and July are usually quite quiet, so we were expecting an increase in August, which we duly got. Although we’ve seen a drop in the number of people coming through the door, our customers are treating themselves, so our takings were up compared to last year. We’re finding that our social media pages are driving most of our new business, which is gratifying, it’s also a good way of getting word of mouth out. With schools going back in September there are more ‘back to school’ cuts, and we expect business to continue picking up this month.”