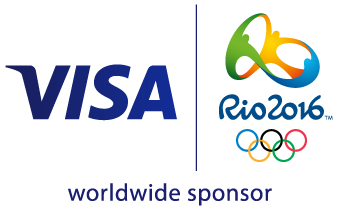 LONDON, UK – AUGUST 11, 2016: Visa Inc. (NYSE: V) is creating the most technologically advanced payment system ever at Rio 2016, in celebration of its 30-year partnership with the Olympic and Paralympic Games.

The world’s leading payments network will send its largest Team Visa group of athletes to an Olympic Games, including refugee athletes competing under the Olympic flag. Visa will also explore new ways to engage and entertain fans using a range of live social media activities throughout the Games.

Since 2000, Visa has supported more than 300 Olympic Athletes through the Team Visa programme, providing these athletes with the tools, resources and support they need to achieve success. This year, for Rio 2016, Team Visa is the largest and most diverse it has ever been, with 60 athletes and two coaches. Team Visa includes:

Inclusion and acceptance are at the heart of Olympic values and, in recognition of these ideals, the International Olympic Committee has given 10 refugee athletes a chance to compete in Rio 2016. Visa is supporting these 10 athletes – as well as partnering with two coaches – from South Sudan, Syria, Congo and Ethiopia, who will compete under the Olympic flag in track and field, swimming and judo.

Kevin Jenkins, Managing Director for the UK and Ireland, said: “The bravery and determination of these refugee athletes is truly inspiring. Every one of them has overcome overwhelming odds to be in a position to compete on the world’s stage. We are proud to work alongside the International Olympic Committee to provide partnership and to support these athletes.”

Visa is creating the most technologically advanced payment system ever at an Olympic Games. With approximately 4,000 NFC-enabled POS terminals implemented across key Olympic venues, fans and athletes alike can benefit from a host of new payment options at Rio 2016, including: