June rounds off weakest quarterly growth in two years, with the full impact of the Referendum result yet to be felt 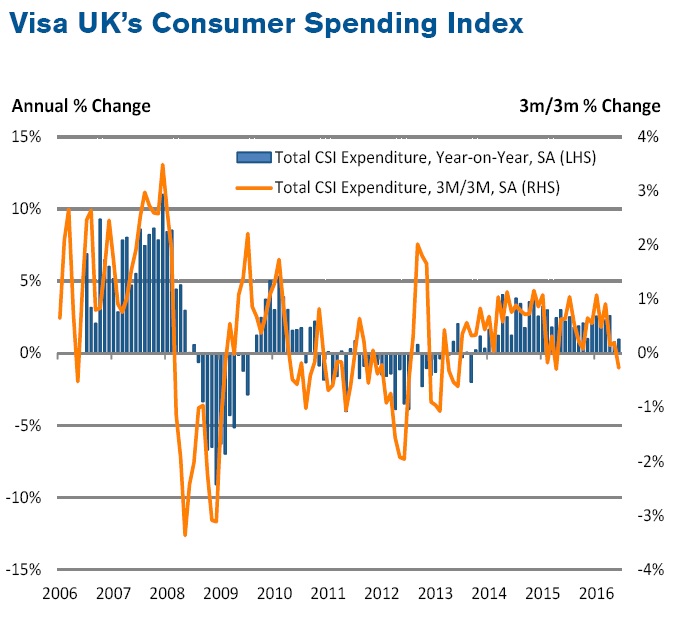 “All eyes will be on consumer spending data as we assess the outcome of the referendum. With the result coming late in the month, this report doesn’t give the full picture but there’s a clear trend over recent months showing a slowdown in overall growth. The Index shows that discretionary spending has been the worst affected area. June rounded off the weakest quarterly growth since Q1 2014, following a marked drop in May to a 27-month low.

“The transport and communication sector, which includes car purchases and flight bookings, suffered another big drop. Industry reports of new car sales falling in June provided further evidence that people are holding back on big-ticket purchases.*

“Meanwhile, hotels, restaurants and bars, which had been the best performing sector in the past year, saw growth slow to its weakest level since January 2013 with little evidence of the summer’s sporting events providing any significant boost.

June was a challenging month for us, with overall spend down 4%, perhaps because people were either away on holiday or chose to watch the Euro with friends at home. We did however experience a boost in spend in one branch where a TV was installed and special platters were served to accommodate England fans.

Looking ahead, we expect that our pubs will perform well, and don’t believe that the referendum will impact our overall sales. But as a small business we are a bit concerned about how the uncertainty around Brexit may impact banks’ lending to businesses for renovation and development.

While sales were up in the first half of June, the last two weeks saw a slight drop. It’s perhaps too early though to say whether the drop in sales was down to the vote, or just because of the wet weather. Being in central London, a lot of our customers said they are worried about their job prospects now, and we fear this whole uncertainty may eventually impact our sales.

June was a moderate month for us with fairly flat spend. As bigger cakes are often booked far in advance it’s unlikely that this was due to any external factors. We are however keeping a very close eye on whether the Brexit vote will have any effect on our future sales. For now though, July looks promising, as we’ve already had a number of orders in.